Generally speaking, I do not follow politics. Besides a few issues that are important to our family, I just don’t keep up on them. I’m busy keeping up with Dora the Explorer, how I’m going to handle a baby from a wheelchair, and the drama of second grade. If I need to know something, I call my politically savvy cousin, Shekinah. I don’t know who my state governor or Senators are (Shekinah is probably having a heart attack now), and I usually don’t know what we’re voting on until I get the ballot in the mail. I vote, and I have a good understanding of our political system due to paying attention in class, but that’s as far as it goes.

But something came to my attention the other day. As most of us have heard, Wendy Davis of Texas, recently turned to filibustering as a way of stopping a law from passing.  Now, to be honest, when I first heard about Ms. Davis, I did not know what filibustering was. So I researched it and read about it. Even then, I wasn’t sure I had it right. From what I understood, filibustering is when you take the floor and just talk. For hours on end, without stopping, as a way to stall the political process, to stop a law from passing that you do not agree with. That couldn’t be right. Permitted, recognized stalling? In the government? That’s something akin to a 6 year old distracting his parents so his friend can sneak a frog in the back door. So I called Shekinah, and I had understood correctly. Filibustering is a grown up term for stalling.

*For the record, Shekinah believes that filibusters can be a useful tool when used correctly and when necessary, and I agree with her.

Ms. Davis’ filibuster was objected when another senator helped her with a back brace.

Filibustering has strict rules. The rules vary for each of the 13 states that allow filibusters, but they are similar. In the state of Texas, the rules are that the senator has to stay on topic, and is not allowed to eat, drink, use the restroom, or sit or lean on a desk or chair.

“During a filibuster, a senator is limited to topics relevant to the bill being discussed and cannot eat, drink or use the restroom during the speech. The rules also prohibit sitting or leaning on a desk or chair under any circumstances when the senator has the floor and is speaking on the bill or resolution.”

There are multiple things that I find wrong with these rules. And it’s not just a matter of my personal opinion; I believe they are unconstitutional. Specifically the phrase “under any circumstances”.  To start with, they don’t comply with the ADA, Americans with Disabilities Act, which states:

“The Americans with Disabilities Act of 1990 (ADA) prohibits discrimination and ensures equal opportunity for persons with disabilities in employment, State and local government services, public accommodations, commercial facilities, and transportation. It also mandates the establishment of TDD/telephone relay services.”

From reading these rules of filibustering, you cannot do it from a wheelchair. If you are not able to stand for hours on end, your attempt will be unsuccessful. As of now, I don’t know of any disabled senators, but that doesn’t mean there will never be one. And we can’t wait until there is one to change this rule. If a disabled senator wanted to exercise their right to filibuster, they would have to wait for the rules to be changed. That would most likely make it too late for the Senator to filibuster the issue at hand.

I believe those are reasonable guidelines for a perfectly able bodied person. But let’s set disability aside. What about a senator with a back problem? Or a knee problem? I’m sure there are a few senators with those. It is unfair and unconstitutional that they would not have the same opportunity. Add on someone with diabetes or hypoglycemia, who can’t go many hours without eating, and I bet we’ve covered 30 percent of the senate. Not to mention the possibility of someone who has bladder or bowel problems, that isn’t able to wait to use the restroom.

I’m not saying that those rules should be done away with completely. I can see why they are a necessary element of the filibuster. What I am saying is that they should be reasonably flexible. Just as any employer would be required to make reasonable accommodations in order for me to work, the senate should be required to make reasonable accommodations to allow a senator with a medical problem to filibuster. “Under any circumstances” should not be a part of those rules.

These rules should be changed to support equality. No person’s lack of physical ability should keep them from taking part in the political process. From being allowed to fight for their beliefs. In a country where we boast about our freedom and equality, “under any circumstances” should not be a phrase found in our government policies referring to physical ability.

These are the thirteen states that currently allow filibusters:

If you were a senator in one of these states, would you be physically able to filibuster under those rules?

As Shekinah would say: Quick! Call your senators! 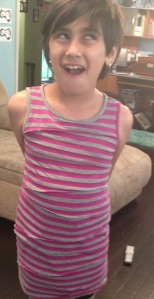 Filibustering is a common practice at our house, too.