**Forgive me that it took so long to post this. At first I had some technology problems. Then I fell and landed on my arm, and couldn’t type, but more about that later.**

Unlike most cases of CP, Spina Bifida is usually recognizable at birth. There is almost always an opening in the back where the spine is exposed, or a bulge on the back from protruding spinal contents. There can also be other visible complications, such as club foot and hydrocephalus. Depending on the level of function, babies with Spina Bifida tend to have less movement than other babies, specifically in the lower body, or from the defect down.

Usually the only time Spina Bifida does not show symptoms and diagnosis immediately at birth, is in cases of Spina Bifida Occulta. This form of Spina Bifida is a small separation in the spine, which usually doesn’t cause any physical problems. In fact, 15% of people have it and don’t know it [SpinaBifidaAssociation.com]. It is sometimes accidentally discovered during an X ray done for a separate problem.

There are also ways to diagnose Spina Bifida before birth. There are prenatal tests that show signs of Spina Bifida, however, these tests are not 100% accurate. The AFP Screening tests for high levels of alpha –fetaprotein, which tends to be (but is not always) higher in cases of Spina Bifida. Also, only a small percentage of those who test high for the protein have Spina Bifida. [mayoclinic.com]

Amniocentesis is an optional screening, in which a sample of amniotic fluid is taken. With this test they are also looking for elevated levels of AFP, which will be apparent in cases of Spina Bifida, because the skin that should surround the spine is not there, allowing the AFP to leak into the amniotic fluid. This test presents a small risk of loss of pregnancy. [mayoclinic.com]

Both of these tests can be compared with other procedural blood tests to determine an elevated risk of SB or other defects. [mayoclinic.com]

I would like to restate the fact that a positive result of these tests is not necessarily a diagnosis of SB or another defect. There are other reasons for elevated hormone or protein levels.

An ultrasound can also show signs of Spina Bifida, such as a visible opening in the back, or other tell-tale characteristics.

Today, about 90% of cases of Spina Bifida are diagnosed during pregnancy, with an ultrasound and verifying prenatal tests. Special prenatal care is then given, and the opening in the back is surgically closed within 24 hours of birth. [betterhealth.vic.gov]

But in 1984, the year Kate was born, this was not the case. They didn’t start testing for Spina Bifida until 1985. They only did ultrasounds for emergencies, and even then they were not detailed enough to show signs of Spina Bifida in the spine or brain. That being her mother’s first pregnancy, she didn’t have anything to compare it with to know that the baby didn’t move as much as other fetuses. And doctors didn’t know to ask all of the developmental questions that they ask now. So when Kate was born with an exposed spine, it was an unexpected shock. She had surgery to close the opening two hours after being born.

Kate and I are glad that we were born in an era with so much technology and knowledge that some of our would-be disability issues are solved before they even happen. And some that are not solved are greatly reduced. But sometimes, just sometimes, we wonder what life would be like if we had been born 20 years later. When they knew things like how folic acid affects pregnancy, greatly reducing the risk of Spina Bifida. Or how stem cells from cord blood can aid in healing a young child with CP. The cool thing, if you think about it, is that we were the guinea pigs that helped them make some of the discoveries that work now. We helped make today’s disabled kids’ lives a little easier. I guess God knows what he’s doing. 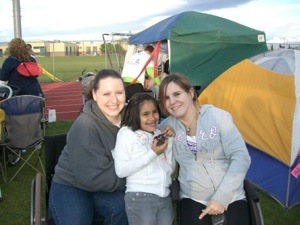